stand up and LEAD! 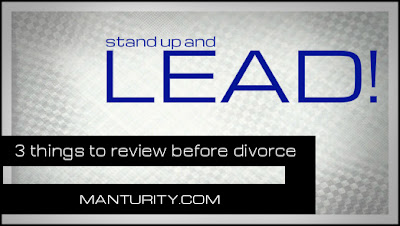 These were my final words at the end of my plea to my buddy sitting reluctantly in front of me. When your conversations have to take place in a small cafe; your words are only allowed to get so loud. I raised my arms up and put my hands behind my head. He lowered his head to his lap and put it in his hands. His marriage was on the verge of disaster and all he could do was sit there...

Hit rewind and go back 3 days.

My buddy proceeds to tell me over the phone that he is done with his young marriage of only a year and a half. I listened patiently on the other end of the line, well aware that this was a familiar call from him time to time. This time was different though, this time he actually sounded like he was finished. Hearing the reality in his tone, I told him that it was time we took things to the next level and meet up. He agreed, finally, to meet up and discuss all the issues. I prayed hard and prepared myself for battle.

Before reaching the almost verdict stated earlier above, we discussed a variety topics and ideas on how and why to save his marriage. He wasn't really interested, but he was respectful enough to hear me out and listen to what I had to say to him. Here are 3 things to review before signing on the dark black line of divorce.