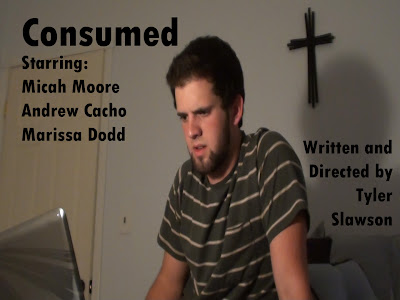 ​Lying in bed in January of 2011, I spoke to God, asking Him what my next film should seek to conquer. What was next? Then I felt it land upon my heart. Pornography addiction. Interesting, I thought. I had never struggled with that. But I am living proof that God calls the willing, not necessarily the qualified.

​It was April of that year and I was wondering, "Where do I go with this?". What is at the heart of this infection? I called up the only source I knew: Focus on the Family. I talked with a nice lady who referred me to their website for some CD's from a previous broadcast. She also sent me in the direction of a list of websites. I did some internet searching and I came across message boards filled with people who were dealing with it or even overcame it. Stories were being discussed; their stories. Stories of lust, of trials, and of journeys.

​Pornography addiction seems very common among men. We are visual creatures. We seek the enlightenment of the allure of visual images and at times, the not so enlightened. What appears like a mirage of a spring in the desert ends up as sand choking us on its way down. It keeps us up at all hours of the night. It can ruin our relationships and, according to 1 Corinthians 6:18, it can ruin our bodies. It looks innocent but becomes a disorder. After all, there is no order in it.

​Filming was fun as I worked with two of my great friends, Micah Moore and Andrew Cacho. Neither one had professionally acted before; a motif in all of my films. Marissa Dodd, a former on-screen sister in a television show that fell through before shooting an episode, portrayed the Voice on the PC. The film was considered and denied acceptance to Sundance, but bowed to a standing room only audience in my hometown in January 2012. It has been shown a few times before and since, but February marks its online debut. It stands as a catalyst and opponent to the belief that “lust = love,” in a month dedicated to love. It stands as a bridge to those who say that their situation is too deep or impossible to cross. To recite to them 1 Peter 5:6-7: “Humble yourselves, therefore, under God’s mighty hand, that He may lift you up in due time. Cast all your anxiety upon Him because He cares for you.”

Check out the video here "Consumed".

Have you fought against this type of addiction?
Share a comment on how you overcame temptation below!

Tyler lives in Durant, Oklahoma, where he enjoys making independent films.
He spends his time with friends and thinking of new film ideas.
Be sure to check out his other short films and follow him on Twitter!
Posted by Manturity at 7:33 AM