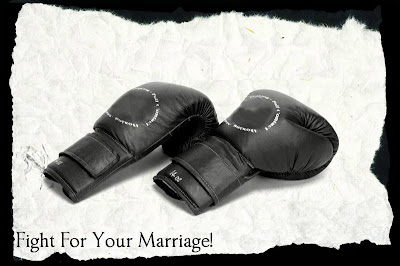 In my journey to become a better man and greater husband, there are still struggles along the way. I have to say though; I would rather slightly struggle in my walk with God, than struggle in life without him. Before I asked God to truly be in my life and in my marriage, life was hard. It was confusing, challenging and a constant battle. Not to say that life is easy now, but at least I know I have a Savior that has my back.

One of the main issues, as always, is the enemy. His mischievous ways are always at work in our hearts, our lives and, of course, our marriages. He knows that as men, we are the Spiritual Leader and he wants nothing more that to cut us off at our ankles. Before I knew Christ personally, the enemy had his way with me. He could pretty much convince me of anything. I thought I had a good handle on life and common sense. I didn't think doing certain things was affecting me or my marriage, but I was so wrong. I was once told that the enemy knows me so well because he knows my father, he knows my Grandfather and so on. He has had centuries to study my geneology, the men who have come before me and either won or lost the battle against him. This idea was revolutionary to me. It changed the way I thought about the enemy and what he was actually capable of in my life. Accepting Christ was my armor. It was my way of suiting up and preparing for full battle. My eyes were opened and I could see the destruction he was causing in my heart, life and marriage. Instead of getting angry at my wife for things, I began to get angry with him. I would imagine myself in a situation like the movie Gladiator. It would be him and me, face to face, man to man. I could make the decision to give in and let him win again, or I could take a stand against him and fight for the truth. For the most part, the truth was always there if I fought back.

As I said, the struggles as a husband are still there, daily. But I wage war on the enemy and his evil schemes. Here are some of my battle tactics that I use against him....

Prayer
Christ is always there for us. Prayer doesn't have to be anything fancy, it has to be trust. Trust that Christ will bring you out of the situation and give you clarity to see the truth behind the situation. He never will give us more than we can handle. So just pray and pray some more.
Be Aware
Understanding the forces against your marriage can help you in your battle, but you have to stay aware. When my wife and I have a disagreement, it is not the time to give up and run away. It's when you suit up and begin the war against the real enemy here. Stop. Re-focus. Pray. And resolve the situation with your wife. It usually isn't over something big anyway, he just makes it seem that way.
Share
This is a great topic to share and discuss with your wife, men. Let her know the types of struggles and battles you face on a daily basis. It will help her better understand your heart and make want to help you in the fight. Have her join in with you in prayer. Remind her about the battle when disagreements arise. This is what the leader does and continues to do. There is no stopping point in this process.

"Let all bitterness and wrath and anger and clamor and slander be put away from you, along with all malice. Be kind to one another, tender-hearted, forgiving each other, just as God in Christ also has forgiven you." Ephesians 4:31-32