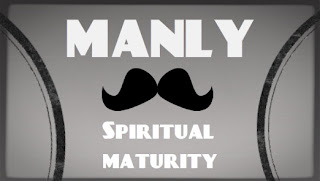 So what does manhood or being manly have to do with Spiritual Maturity? If you asked me a few years ago, I probably would have fought this idea saying that "I am a man already" or "I can be mature, even if I'm not being a good Christian". Of course, now, I would say I was very immature in general and spiritually. The hard fact is that I am much more mature now that I am truly following Christ and I make it a daily effort to do even better. So men, where does it start? When do you know you either are being a spiritually mature man or you need to start? Some guys might wait until they finally move out of the house. Some guys might think it's after they landed that first big job. Some think it's when you get married (I know for a fact that that is not true). Some men might wait until their wife drops an emotional bomb on them or even leaves them. Some men might wake up after this or just move on doing what they do. Where does it begin?


DISCIPLESHIP
Definition? A follower of the doctrines of a teacher or a school of thought.

Let's be honest, we are all a disciple of something. We all come from different backgrounds, different teachers, different parents and different beliefs. We may have been taught how to be a man from our Father, a close mentor or just by what we have observed over the years. Some of us learned the discipline basics early in life. For me, it was taking out the trash weekly. It was mowing the lawn weekly. And it was listening to my fathers instruction as it was handed out. Your teachers at your school and college. Your boss and coworkers now. All of this has influenced you and shaped who you are now. But are you really being a man? Are you really spiritually mature? When you look up the word Disciple, you get a couple standard definitions and then you get the definition of a follower of Christ. Stop and think about the disciples of Christ. Whether you are a Christian or not, you have most likely heard the stories of Christ and his 12 disciples. These were the men that dropped everything for Jesus. Without going too deep with their stories, you can see how a disciple must make a change. He must acknowledge that their is a right and wrong way and make a choice. In the disciples cases, they chose to be Spiritually Mature and follow Jesus wherever he desired to go. Are you willing to even drop one thing?

Personally I grew up knowing about Christ, but that was as far as it went. I could talk the talk, shake the hands and play the part. My father is a great man, but he showed me no example of being a real follower of Christ. He taught me key values in life that took me far, but still life required more. Life hit me after I got married. This was the time when I was required to be more mature. I had a wife, a new job and thought life was mine for the taking. Read 'Why the Train Tracks' to hear how I finally began my path to Spiritual Maturity. Think about it, you're living for something already. But what is it? Following Christ, thirsting for spiritual maturity and being His disciple turned out to be the manliest thing I could have ever done. Confidence issues? Christ can change it. Marriage issues? Christ can change that too. Work issues? Yep, you guessed right, Christ can change that too. Depression? Fear? Failure? I could go on for awhile, but I think you get the idea.


Be a man. Be a disciple. Lead by following.
Have a question? Opinion? Story? Share below.

Posted by Manturity at 5:33 AM