Every Man Sets His Own Standards 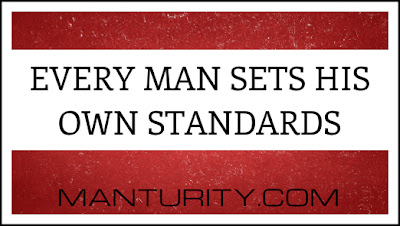 Are you in control of your choices each day or is somebody else?

Over the years I have ran into many men who quote something like the following, "I don't believe in Christianity because my father never believed" or "I don't believe in that kind of stuff because of what 'they' say." Who are 'they' and why are they saying these things, I ask? I tend to get frustrated when I hear these type of responses, because quite frankly, they are not responses they are excuses. This is a man who is not in control of his beliefs and he has allowed the influence of others who may have not known the truth to set the standard for his life.

How long will a man choose to live according to these lies or excuses before he decides to take matters into his own hands?

How much longer till he matures and decides to search out the real truth himself?

Before the days of Manturity, I lived my life according to the standards of others. I chose to base my beliefs off of things I had simply heard and grew up learning. I used the excuses I mentioned above every time I was approached by someone who actually knew the truth and was essentially trying to help me. I found a strange comfort in this lie I was living when I was in the moment, but I also felt empty afterwards. I didn't know what to do until my life started to fall apart piece by piece.

I was quick to anger, I was quick to use sarcasm as a means of protection and I was quick to defend my "standards" even though I knew I had none at all. I was irritable in my marriage, I was unloving to my wife and went down a destructive personal path that almost destroyed my marriage. A good Christian friend of mine finally got a hold of me and challenged my standards. He could see though my false protection measures and told me to step up and find out the truth myself. It was time.

Even a man without standards should be smart enough to recognize a man that has standards and his life is living proof of it. As shallow as it sounds, this played a major role in choosing to stop living according to the standards of "them" or "they" and find out the truth for myself. Note that this should be an example for all of us men that the way we act and are seen by others can be enough to cause another man to change his life. This was over two years ago now and I am still learning, growing and striving to be the best man of God I can possibly be each and every day. Let's choose to let Jesus be our standard!

So who is setting the standards in your life?

SHARE some of your personal experiences in the comments below.

Posted by Manturity at 5:27 AM