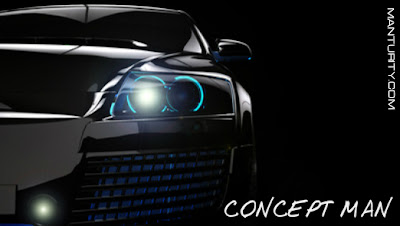 Any good man can appreciate the lines, curves and special features of a new concept car. As a young boy, I would love to look at car magazines in the store and see the latest and greatest cars that "might" come out to the market. 15 years ago when I was reading these magazines, I thought there would be flying cars by now and space rockets sitting in people's front yards. We can all dream I suppose...

Speaking of dreams, is the rough and tough man of the past just a concept anymore? Have the lines of manhood been blurred and confused by powerful advertising empires? Have the lines been crossed in television shows that show the male or husband figure to be nothing more than a klutz? What do we do about these problems? We introduce a shiny new "concept man".

Set up the stage. Invite the crowds, the unbelievers, the doubters, the curious ones and the supporters. It's time to rethink manhood and introduce the Concept Man.

Pay attention to the front, he's about to come out. Insert your name. Que the applause, the hews and the haws. Out front now, he proceeds to tell everyone...

The New Features of Manhood:

Christian. Yes, he's a Christian. The unbelievers look at each other with, well, unbelief. He doesn't waver in his words or in his first feature declaration. He proceeds to walk around and tell the crowd why; they listen closely. He can tell they're interested. A Christian man has values, he tells them. Offended? He is a man that lives for things like faith, love and sacrifice. He looks to the past to find his vintage, but long lasting manly values. He takes on the persona of the man himself, Jesus Christ. He is not intimidated, he is not afraid.

He continues and tells them that by believing in Jesus he has a real purpose; a real sense of something bigger than himself. He tells them all that the Christian man is selfless. He knows that he comes in second place. He puts others before himself. He gets out his crisp "new man sticker" (you know, like a new car would have on the window) and it clearly reads that he puts his family, his wife, his children first. The doubters had to stop shaking their heads due to the proof in their face. They worried at what other features this concept man was going to show him next. He stopped walking around and took a knee to pray.

Purity. Yes, he's not a man influenced and blindly led by the pornography industry. The curious ones in the watching crowd start to laugh and almost turn away. He again shows them the new man sticker and they stop in their tracks. "There is no way men in this culture can abstain from this industry", they say. The man, again, holds his own; convinced that this feature is one of his best and clearly one of his strongest. Immediately the crowd sends a beautiful woman to the stage. She struts around him with intense confidence that he will look her up and down and fall victim to her false beauty. What does the man do? He closes his eyes and looks toward the ceiling; no he looks towards his God for strength.

This is the time that the supporters started to stand up and, well, support. These were the men in the crowd that believed in the same thing as this Concept Man. These were the men that said they would join in the cause and help him promote this radical new idea. With multiple men on the stage now, the crowd could see that what they were looking at was not merely a Concept of a Man, but rather a concept that was coming to light and would change the way the world would look at men. Forever.

Check out Part two: The Interview

Are you a Concept Man?
Check your sticker and add more features:

Posted by Manturity at 8:59 AM