God Forbid, I Joined A Church... 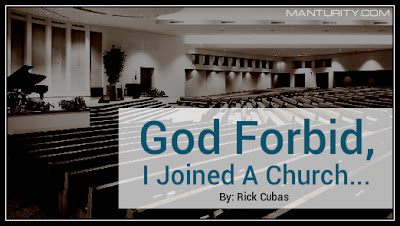 I recently told a good friend of mine that I was attending a Baptist church. His first words were, “But they don’t believe so many things.” You have to understand that I am a full fledged charismatic/ Pentecostal born again man. To make matters more interesting for him, I shared that at one of the services, a lady heard me signing during the praise and worship service, and thought that I had an angel’s voice.  It turned out that she was the choir director and lovingly persuaded me to join their choir. By the time I was finished talking to him, he didn't know what to say. See, I was the guy who lifted up his hands during worship, spoke in tongues, and even occasionally ran down the aisle. Get the picture? Reflecting on this friend’s reaction inspired this post.

“And He said to them, go into all the world and preach the gospel to every creature. He who believes and is baptized will be saved; but he who does not believe will be condemned.” Mark 16:15-16.

When Christ told his disciples to preach the gospel, He never said anything about going to preach to dudes because they will be baptized with the indwelling presence of the Holy Spirit. Jesus never said, “ And their denomination shall be called...”. Nowadays, we have segregated ourselves into so many man-made doctrines, and it appears that many of us have forgotten the simplicity of the love story of Jesus Christ.

When I received Jesus as my Lord and Savior, I did it alone. I heard no voice saying, “Go ye join the Pentecostal, Baptist, Charismatic, Lutheran and so forth movements.” No, I was redeemed, and the angels in heaven threw a party for me. The angels were not concerned about what denomination I would gravitate towards. They were parading and rejoicing about my decision. Let me be very clear that there is nothing wrong with any these man-made doctrines. It boils down to personal preference.

If you look at history, you will find out that many wars were started by Christians factions, not unbelievers. Fighting for power or whose perspective they thought was best to follow.  Nowadays, our wars are more subtle since we have become so civilized and educated. We see even in the church, we have become so politically correct. Some of us are fighting against ourselves all the way to the chapel because of doctrinal ideologies. When we present ourselves before the Lord, He is not going to ask you what doctrine you followed. He is indeed going to ask you, did you know my Son as your Savior.  The enemy does not have to spend any effort here since we have now become his biggest ally.

“There is one body and one Spirit, just as you were called in one hope of your calling; one Lord, one faith, one baptism; one God and Father of all, who is above all and through all, and in you all.” Ephesians 4: 4-6

This is a fact, all “Christian” doctrines point in one direction, Jesus as the only Savior. Our command is to love one another, not to separate ourselves into so many different entities. We are supposed to be One Body.  There really is no time for anything else, but to cheer each other on through the best race there is.

So are you still stuck following
doctrines and ideologies or Jesus?
Share in the comments below.

This is a guest post by Rick Cubas. He is a wild at heart kind of guy who is married to a wonderful woman and is a father to three beautiful little girls. He owns a Farmers Insurance Agency in Houston, TX.  He is a changed and redeemed man, who had an ocean for a backyard as a child and never imagined he’d grow up to become a friend of God. Check out his other posts here!
Posted by Manturity at 4:01 AM