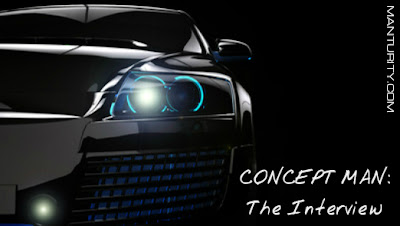 After all the hype and chaos started earlier in the reveal of the CONCEPT MAN. He was of course asked by many in the crowd to do some follow up interviews. They wanted to know more about this concept man and how he thinks he'll come to be popular in this current culture.

"One at a time, one at a time", he says to them. They blurt out their questions as typical media does when a new and shiny product comes out to the market. They knew this concept was much different though. What  makes you think this will stick in today's culture? Who gave you this crazy idea? What are some of your other different features. He never blinked. He just downloaded the questions and prayed that God would reveal the right answers.

Without hesitation, he continued to name off more features:

Maturity: Yes, the concept man is mature. How so? This again easily caused a stir among the new culture folk. He smiled and continued. The idea of maturity in this culture has taken a back seat with men. Boys are now still boys well into their twenties. These boys attend a general college and must learn to live on their own without any instruction. Once out, they are immature and unprepared for the harsh world ahead of them. He tells them that this was taken into much consideration in the redesign of the man.

The older, more mature men out there must not end their pursuit of these young men. We must rather chase their hearts and teach them the values they will need in their all to near future. We understand that the choices from there are up to them, but we have to try and at least warn them. Yes, maturity is to be a new standard in the concept man. We that are older must take the initiative now! We must show everyone that maturity lies in the values of the Christian man, the morals of a pure man.

In closing the man tells everyone this: We are all capable of becoming this concept or this idea of what a man should be in today's world. All we must do is seek out God, keep a clean heart, grow in maturity and have confidence. God Bless.
__________________

His list has ended, but what about yours? Become a Concept Man. A man that is different from this world, but a man that the world needs badly. If you consider yourself a Concept Man, share your features for other men in the comments!

Posted by Manturity at 4:20 AM