A Man of Hope 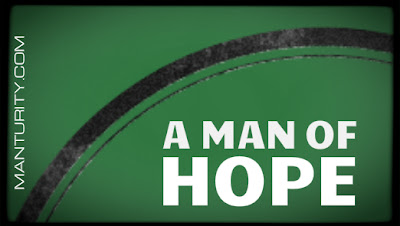 To understand what a man of hope looks like, we must first understand what it is to be a man without hope. Just about any thesaurus you open will offer despair as hope’s antonym. Essentially, a man without hope is a man of despair; someone acquainted with grief, acquainted with pain—a man of sorrows. The question I have is this; do we truly understand the road of hope without first walking down the path of suffering? Who is the model of a man of hope? I would submit to you that the man of sorrows and despair, as described in Isaiah 53:3, is in-fact the very model of hope for every man. Isaiah 53:3 states, He [Christ] was despised and rejected by men, a man of sorrows, and familiar with suffering. Like one from whom men hide their faces he was despised, and we esteemed him not (NIV).

I learned how to be a man of hope during the birth of my second daughter, nearly two years ago. She came into the world as a healthy 10 pound bundle. Shortly after her first nursing, she spit up a very unusual substance with the consistency and color indicative of a very life threatening condition. Moments after we alerted the nursing staff, those same nurses very calmly carried our baby girl to the nursery for what we assumed to be a routine assessment. Then enters a doctor, a specialist we’d never met before, making an awkwardly nervous introduction of himself and the new road of suffering we would embark on. As this neo-natal gastro-intestinal pediatric surgeon stood before my wife and me, he shared about the potential need for emergency surgery and a potentially life-threatening bacterial infection that could kill our baby. Needless to say, my hopes were shattered—everything changed. I was left in a position beyond my control and certainly outside of my own abilities to alter. Our daughter was segregated from personal contact for many days as she lived in an intensive care unit with younger and in some cases babies that were a quarter of her size or less. It seems almost paradoxical that she was in intensive care yet there she was with wires, tubes, and a device alarming every few seconds. It caused a death-like coldness to fall upon my wife and me as we tried to grasp our new reality. No David and Goliath faith for me, my flesh emerged and my spirit was crushed. I had no hope; I was broken.

With nothing else to lean on, I leaned across a granite sink in a hospital bathroom and made my own as I cried out to God with brokenness and exhaustion. I felt the Holy Spirit begin his work of comfort and peace as brothers and sisters visited, prayed and cared for our family. Later that week I was joined in the hospital by a close colleague and co-worker who arrived with a wife in premature labor. They had begun their own nightmare and God saw fit to have me walk as a man of hope, with this man of despair, as his premature child began slipping away and ultimately went to be with Christ. I learned how to walk with despair, even as I hoped for my own daughter’s healing. I was sensitive, open to it, I got it, it all made sense to me now because the hurt and pain was now an acquaintance and the outcome uncertain.

You see, God desires to use us at every stage of our own brokenness to minister as men of hope to those around us. Christ himself was a man of hope even while he was nailed to the cross. In his time of despair he reached out as a man of hope to one last man of despair who dared to believe in Him as THE man of hope. Days after walking with this co-worker and his wife, we began seeing improved blood test in our daughter, and x-ray films were coming back clear of any infection. Signs of life and normal behaviors began emerging. Our hopes moved from strengthened to restored as we were invited to hold our daughter a week and a half after her birth only to take her home days later for what has been a beautiful two years.

What is a man of hope? I believe it is a graduate from the school of despair. It is a man who learns obedience through his suffering and put his hope in Jesus Christ.

What do you place your hope in?

Posted by Manturity at 5:51 AM