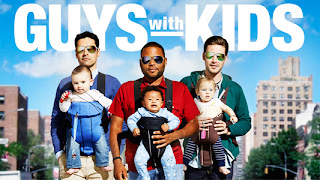 It's the fall television season and all the networks are putting out their new shows. One of the things I look for are shows related and meant for men. Almost year ago, one of the major networks put out a show called 'Man Up'. I actually wrote a post about it that you can check out. Man Up was a complete disaster! It had men in their thirties that did nothing but wine, complain and act like children. The show was not about men "manning up" at all, it merely showed a bunch of immature men that were trying to man up and failed every episode. I think the network realized its faults and the show is not to return.

Recently a new show popped up on the scene called 'Guys with Kids'. The previews looked slightly skeptical showing three dudes all strapped up with babies and kids around them. At first I thought this was going to be another fail. I figured it would be three guys, all divorced, trying to make it on their own by dealing with the kids and their ex-wives. The worst part is I imagined the show would of course be a comedy. The show would be selling the fact that it is acceptable to be divorced, raising kids and all the time making fun of the scenarios. But this was not the case.

After watching the first episode, I was surprised. There were, of course, guys that had kids, but two of them were married while the one was divorced. I became more interested in the show based on these ideas. The main idea of a show is the relationship among the three guys. They and their families all live in the same apartment building and visit each other often. The one guy has a wife and a couple younger girls; the second guy has a wife and has four boys; and the third guy is divorced with maybe a 12 month old baby. The mother is still present in the show so far, but they mostly deal with trading the baby back and forth. Most of the comedy comes from the relationship between the three guys, but a lot of entertainment is aimed at all the kids.

Overall, the show is not a complete miss from the target. It shows pretty good examples of a couple marriages. Do the marriages go through some troubles and run into some strange things? Well, yes, but what marriages don't? And most of the time the troubles in marriage can be pretty funny if taken with the right heart. It also shows an example of a divorced couple, but at least the father is around and takes responsibly for the child. In the end, it doesn't set a horrible example and is much, much better than Man Up.

I don't know if it will last for seasons to come, but check it out and share your thoughts if you get a chance.