It's one thing for the culture to notice that there is a problem with men these days, but it's another thing to leave it up to culture to "try" to fix the problem...

I recently started watching a couple new shows on TV that were suppose to portray a "manlier" image. The first show that came to the chopping block was 'Last Man Standing'. I have to say that out of the newer shows this is one of the better ones, but still not overly "manly". The father, Tim Allen, is surrounded by his wife, three daughters and his oldest daughters baby boy. The concept is to show men that they can still be manly amongst all those women. He also wants to show his grandson that he is in charge and that the true man is still alive..
The other show that came out recently is titled 'Man Up'. In my opinion, this show did not hit the bar at all. I don't think it even realized there was a bar to aim for... The show is loaded with immature men in their forties who are trying to grow up. Really? So the show is not about mature men doing the responsible things in life, but rather doing the irresponsible things and trying to learn from them. The show starts with the main characters playing video games and ends with them playing video games. I don't think this is hardly any example of men that are making an attempt to 'Man Up'. The networks know that a manlier image is needed back on television, but who is running the networks? I can't answer this question, but maybe someone could enlighten me with the answer.

I also find it interesting that these shows have come out while a new movie is out in theaters called 'Courageous'. Men that are struggling in life, but come to a Resolution to fix their issues. This is a true example of men becoming responsible men! Television shows are more easily accessible, but they still require an audience that wants dumb people cracking the same old jokes and making no real point. The new shows mentioned above do have some very subtle and sometimes very quick examples of men doing the right, responsible and mature thing, but the majority of the shows are fill and fluff.

So the idea is simple. The world, our family, our friends, our workplace need to see men 'Man Up'. But how that happens and where the influence comes from needs to be managed properly and responsibly. Sure, these shows can be funny and have their moments, but being a man is more than that. It's about growing in maturity, becoming a man of integrity, making the hard decisions and raising kids that know who is in charge and why. Man is ultimately responsible to God. It is the way we were designed from the very beginning. If a man can stay true to his roots, his Father, than his path will be straight and long. 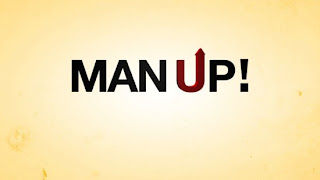 So in short, Man Up! And do it carefully and according to the design God intended.
Posted by Manturity at 9:48 AM