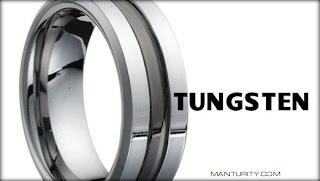 First discovered in 1781 and finally perfected in 1783, tungsten became a material much stronger than your average steel. Despite its strong characteristics, it didn't play a major role until World War II. Its robust nature and very high melting point made it key in the arms business back then. Tungsten has also been called "heavy stone" and can also be called "wolframite". Just from those two optional names make it sound quite strong. Its modern day uses are a little more widespread though. Tungsten can be found in light bulbs, heating elements, rocket engines and on my finger.

As my wife were anticipating our big day (marriage). We, like all other couples, had to find our perfect rings. I had never really thought it was a big deal to find "the right ring". I figured it could be something that was simple and not flashy (my wife would agree that that is my overall style). No jewels, nothing shiny, just simple. I looked around without much effort and my fiancée (now wife) mentioned getting a ring made of tungsten. It sounded expensive, but I took it into consideration. She told me that the advantage with tungsten was it would not scratch. She also told me that if it something happened and they needed the ring off, they might have to take my entire finger. But, like any good man would, I avoided that point. My work involved using tools and handling materials on a daily basis, and the last thing I wanted was for my "investment" (ring) to get damaged only after a few years of use. I agreed on the tungsten, not flashy of course, and we made the purchase. I would go into her ring process, but I don't have the space :)

Why does all of this matter? A ring is on your finger to make a statement. In my case, it says "I'm married, so hands off", or something like that. I think most men wear them because it is a part of the process. But women wear them for much different reasons. There's is a very BOLD statement and they love it. When I look at my ring that I have been wearing for over six years now, I am amazed at how strong it is and how great it still looks. Tungsten is the real deal. Tungsten reminds me of myself and my marriage. The very, very minor surface marks are there from the years, but it still looks great. Life is full of "surface scratches", but we must march forward. We must have the weight of a "heavy stone" to not give in to the pressures. And we must have the tenacity of a "wolf" to make it past some of life's battles. When I look at my tungsten ring, I know that it is around for the long haul. It's not going to get heavy damage. It's not going to scratch easily. I want to be a Man of Tungsten for my God, my marriage and myself. The reminder is always there and I look forward to growing old with it by my side.