Therefore shall a man leave his father and his mother,
and shall CLEAVE unto his wife:
and they shall be one flesh. Genesis 2:24 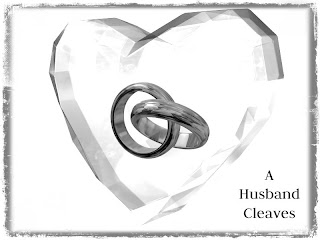 This is an interesting topic for today's culture. First of all, the word cleave is not a common word anymore therefore is not very well known. The Bible refers to this word in two different forms, which are to separate or to join. I thought this was an interesting pairing, but learned that they kind of work together. Some other similar words are: unite, draw together, joined or glued. This idea of cleaving was brought up in the first book of the Old Testament, but it was also brought up again in the first book of the New Testament. Mathew 19 reads; "at the beginning God made them male and female. For this reason a man shall leave his Father and Mother and be UNITED to his wife, and they shall become one flesh. They are no longer two, but one. What God has joined together, let no man separate."

Where to start? Being a man in my late twenties, I have seen the breakdown of the twenty something male. I have men in my family and know friends that seem to be forever in their teens. They depend on Mom and Dad to support them, house them and feed them. Most parents appear to have no problem with this because it is happening more and more. The problem is the boy never becomes, a man. He becomes so dependent on his parents that he does not grow up, he does not mature and he does not become "husband" material.

My personal experience occurred in my own marriage. I had, and still have, a great relationship with my mother. One of the things that helped me was that I moved away from home for college and moved farther away from home after college. I got married shortly after college and moved in with my lovely wife. I didn't understand why there was this underground tension between my wife and my mother. Every time my mother called or needed something I would jump on it. I thought this was of no issue, but my wife always had an issue with these occurrences. This would inevitably cause a fight to break out and things would go down hill from there. I didn't understand why this kept happening. Don't get me wrong, you should maintain a healthy relationship with your mother, but you are now a married man and your responsibility is now to be aimed at your wife. She is the one you need to start to confide in; she is the one you need to talk to things about and she is the one who needs to learn to support you. I had to learn this early on in my marriage and I'm glad that I did, because it saved our marriage a lot of heartache. When I heard the verses above and really understood the meaning of them, it changed the way I treat my mother and my wife. It changed my marriage.

Ultimately this idea applies to both partners. Both spouses need to get use to the idea of depending on each other rather than their parents. This is not the easiest thing to accomplish, especially early on in marriage, but is absolutely essential. It will teach you and your spouse work out issues together, make big decisions together and make you a stronger couple.

Are you willing to be a husband or wife that cleaves?