Why the Train Tracks?

If you haven't noticed, a few of my profile pictures on my sites show a train or the tracks in the background. This is, of course, is by no accident. My wife and I were actually traveling along the top of West Virginia. We decided to take some back roads due to some potential traffic hazards that were showing up on our phone maps. These back roads turned out to be pretty cool. We left our house in Virginia to go to Pennsylvania really early in the morning. When we ventured out on these back roads, it was just getting light outside and there was some fog in the air. We passed some really cool fields, where the fog was settling just right. We traveled along the rivers edge for a few miles and enjoyed the eeriness of water ripples. Eventually we came to a point of the road that traveled alongside the rail road tracks. You see, for some time I had been praying and hoping for an opportunity to find the perfect setting for a photo of myself on the train tracks. We came up to a little side road that crossed the tracks and decided to stop.

There were two sets of tracks at this particular location and the slight fog in the air added the right touch of softness. I told my wife that I wanted to run down the tracks a ways and have her take a picture of me with my arms out and my head faced up looking to God. I proceeded to run down the tracks thinking "I hope a train doesn't come now." I looked back, struck my pose and my wife took a few photos of me standing on the tracks. Let me go back in time a little bit. 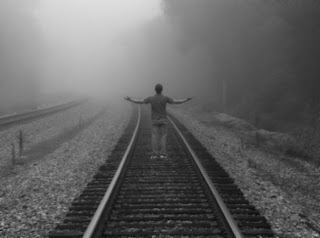 A little over a year ago, you would not have known this man who is now writing this blog. I was an angry, doubtful and hopeless man. My marriage was literally on the rocks and at the verge of divorce. My heart was long gone from any emotion and I was ready to move on with my life away from everything I knew. I had been raised in a Christian home and school my entire life, but I never actually knew who Jesus really was. Marriage only brought out this fact more and in a much stronger way. I know why now, but I had no idea then and did not care to. As I considered the idea of divorce, I had a few brothers from my Church that would continue to press into me and lead me back down a straight path. I would meet with one of my buddies on a weekly basis and listen to him try to sway me. (He is the author of A Man of Hope and Quality Construction). Near the end of this madness, I started to meet with my pastor. This was honestly one of the last things I wanted to do on my list, but for some reason I just went with it.

I entered his office thinking this was a waste of time. There was no way he was going to convince me to change my mind. I went forward and discussed the whole story with him and got into most of the ugly details. He proceeded to talk to me about what real marriage is, what it stands for and what it is suppose to mean. He challenged me with reading the book of Proverbs and to start researching what it really meant to walk and worship with Christ. Towards the end of the meeting, I told him the following phrase "In order to change, I am going to have to get hit by a Freight Train." His answer was perfect. God gave him the other half of that phrase and it was at this moment that something shifted. Something in my heart, my realist, logical heart broke. He said the following phrase:


In order to get hit by a freight train,
you have to put yourself on the tracks.

I know it doesn't appear to be mind blowing, but for me it was life changing. The train can only hit me if I am willing to stand on the tracks. In other words, I will not find God unless I am willing to go to Him. How am I to find God if I am not willing to take the first steps to get onto the tracks? How am I to find God if I don't have the courage to stand on those tracks until the train hits me? How am I able to love God, if I don't give him my heart? Think about it. Thats all I did when I left his office. I thought about it over and over again and I started to realize what my answer was. God was, has and still is waiting for me to get on the tracks. He was was waiting for me to take the first, bold step of faith. Ever since I decided to take that first step, my life has been forever changed.


What step of faith is God waiting for you to take? Are you willing to step on the tracks?

Oh, and I forgot to mention that as we were taking the final photos, a train did 'ring' in the distance and about 5 minutes later a train came right past us, on the same set of tracks we were standing on........
Posted by Manturity at 6:43 AM